‘Ayesha thought for a bit. Her parents had told her never to talk to strangers. But they hadn’t mentioned anything about strange dolphins.’

Ten-year-old Ayesha has everything an adventurer needs—courage, cleverness, creativity, and a complete lack of caution. But even Ayesha has to admit that the mission Shekina (the Queen of the Seas, no less) has charged her with may be slightly out of her league.

After all, it does involve saving the world. Of course.

And it’s not like she has a fire-breathing dragon or a super-smart android as a sidekick. Try a snarky surfboarding snail instead.

Join Ayesha as she jumps headlong into an extra-extraordinary adventure that takes her halfway across the world (and a little beyond).

In 2019, Ayesha was adapted into a play by Enacte in San Francisco

5.0 out of 5 stars Through the Looking Glass of Life

Mr. Chowdhury takes the reader on a magical journey; one which seamlessly combines fantasy, fact, science, art, literature, history, architecture and spirituality. And yet he does this effortlessly. I highly recommend this book to people of all ages who are young and adventurous at heart….

Ayesha and the Fire Fish makes for delightful reading.I love the way Ajay weaves mystery and adventure intertwined with bits of history to this charming story which makes for an easy read.It fires the imagination of young minds taking them into a whirlpool of magical fantasy . Wonderfully captivating.A delight!

The book takes the reader on a magical journey. The most interesting fact being it combines – fantasy, facts, research, science, art, literature, history & spirituality in a seemingly effortless manner. It also weaves mystery & adventure intertwined adding another feature/feather to the cap. A must read book for children, highly recommend for fantasy lovers.

Ayesha and Her Parents 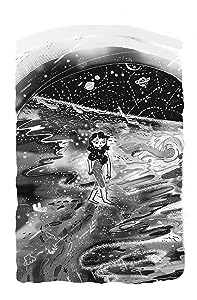 Ayesha was gripped with a sudden urge to smell the sea, feel the wet sand squelching between her toes and see the stars. She had never been out of her room this late, but mum and dad were asleep in the next room . . .

Ten-year-old Ayesha is clever, funny and rebelliously determined to have an adventure. But where will she find it? Here she is, bored on holiday, missing her dog, wanting to be Hermione Granger but there’s NOTHING to do. So she sneaks out to the beach on a shooting-star filled night and is pulled headlong into a beautiful (and scary) underwater world where she is given an impossible mission…to save the world! She can’t do that… can she?

Ayesha’s parents love her to bits but are, shall we say, distracted. Her mother is always busy on her computer or the phone as the boss of something called a ‘hedge fund’ (‘but it had nothing to do with gardening or with fun as far as Ayesha could tell’) and her dad has become a ‘house husband’ who is taking full advantage of giving up work to spend his time relaxing at the spa while wearing his sarong. So it is pretty easy for Ayesha to slip away and have her adventures… even if it means travelling to different parts of the world while pretending to be at summer camp! 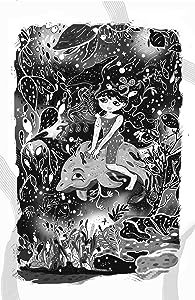 Aoife’s back was beautiful. It was smooth and slippery and gleamed a silvery grey like the mercury she’d seen once in chemistry class. Colours that were never the same twice danced under her skin and there was a small, recessed blowhole on top of her head. Aoife twisted her face to look at Ayesha and winked, ‘Ready to go under?’

But before she knew it the dolphin had dived beneath the waves.

It’s midnight on the beach. Stars are shooting in the magical sky above her and Ayesha hears a voice calling from the sea. At first she thinks it is a joke but then… what? A talking – and mind-reading – dolphin with the strange name of Aoife! Ayesha climbs onto its silvery shiny back and together they swim deep, deep under the sea to meet… someone special!

Ayesha is not alone in her quest. But she is not given magic powers or a super cool invisibility cloak. No. She is given a snail. Called Caro. Who is super sarcastic. And rides a surfboard. And eats chocolate. And tells terrible jokes (‘What was the slug doing on the highway?’ ‘I don’t know, what?’ ‘About a mile a day!). And sometimes she does all three at the same time. But, in times of danger, when she is really needed, Caro can be counted on to reveal some pretty cool tricks that she usually keeps under her hat (well, her shell). 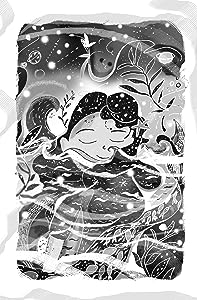 Ayesha is transported on the back of a talking dolphin to a magical world under the sea where she sees coral reefs of dazzling hues—yellow, blue, orange, purple—glowing in the moonlight. Swimming amongst them are shoals of brightly coloured fish, in every shade, shape and size that anyone could ever imagine… She passes eerie caves inside which lurk—heaven knows what. She swims past huge rocks and massive boulders that look like they have remained undisturbed on the ocean floor from the beginning of time. It looks like the surface of the moon….and at the very bottom of the ocean she finds something utterly, completely, totally, rub-your-eyes-in-disbelief-and-pinch-yourself crazy!

‘Don’t look down,’ whispered Xander, just as Ayesha looked down and screamed. They were five floors above the street. Hearing her, one of the dogs leapt towards them and Xander, missing his footing, flailing his arms wildly, fell off the parapet. Ayesha yelled in terror. But right at the last moment, Xander grabbed on to the edge of the roof and hung there, dangling precariously over the cars cruising past on the street five stories down.

Ayesha uses all her creativity and wiles to make her way around the world, trying to piece together the pieces of the puzzle. But sinister forces are trying hard to stop her. A pair of glowing shape shifters that can transform into anything – from sharp beaked vultures to ravenous dogs to ordinary looking but deadly teenage girls – follow Ayesha’s every move and attack at every turn… how will she find the strength and ingenuity to overcome them?